For many, a curry isn’t a curry when it isn’t served with a flatbread to soak up the sauce.

Ask most brits to name one and they’ll say naan, which has become an absolute staple in curry houses across the country. But there are actually more than 30 different types of Indian bread, most of which don’t get the attention they deserve!

Whether leavened or unleavened, made with wheat, rice or lentils and baked, grilled or fried, Indian breaks are simply delicious.

Read on to learn about 11 of the best to make and try at home.

A mainstay of curry houses the world over, naan is one of the most delectable Indian breads. Traditionally baked on the walls of the Tandoor Oven, the dough droops as it cooks, forming the familiar teardrop shape.

It is a welcome accompaniment to dishes like chicken masala or eaten on its own, smothered in garlic butter fresh out of the oven.

Naan is a leavened bread that uses yeast or baking powder to ensure it puffs up as it cooks.

Having a tandoor oven in the home makes all the difference when preparing naans as it imparts a unique smoky flavour. But if you don’t have the space, you can also bake naan in a regular oven or pan. 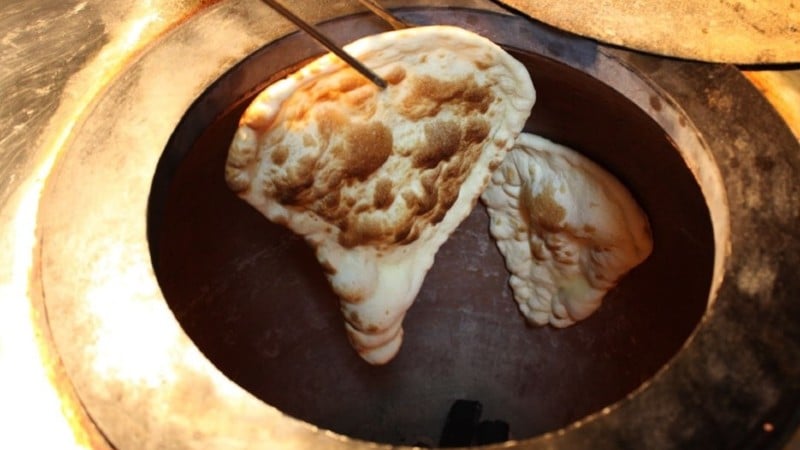 Rice and roti are as essential to Indian meals as each other – sometimes it’s rice, sometimes it’s roti and many times, it’s both. Simply mixing a dough of wheat flour, oil or ghee and a sprinkle of salt can produce this traditional Indian flatbread.

Mix the dough and roll the bread thinly using a chakla belan into a circular shape, or press using a wooden roti datta or roti press.

The process is simple and safe when you have the correct equipment (no burnt fingers attempting to correct the shape whilst cooking on a hot pan). Rotis don’t usually require oil in the pan as the heat will cook the dough in seconds. 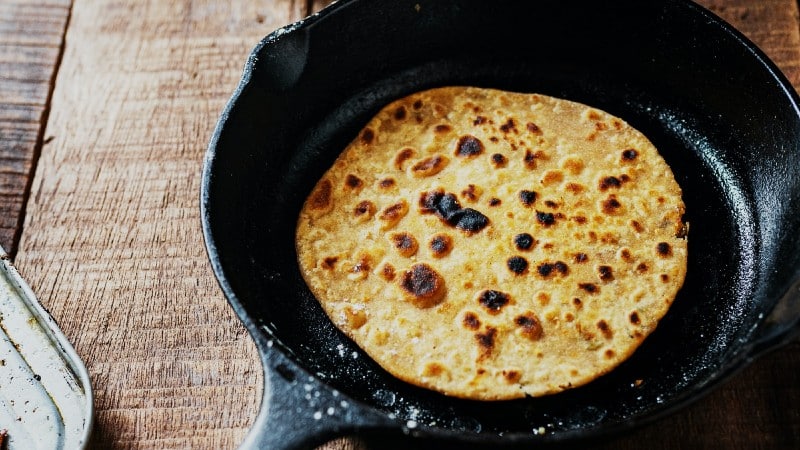 Chapati is a Hindi word meaning slap because you slap the dough between your palms to form the shape of this Indian flatbread. It is a thin bread consisting of flour, water and salt.

For many, the terms chapati and roti are used interchangeably. This is because chapatis are technical a type of roti. However, there is a difference. Chapatis tend to be more rustic, using whole wheat flour and are often slightly thicker.

Chapatis are popular across the whole of the Indian subcontinent, including countries such as Bangladesh, Sri Lanka and Pakistan.

When Britain colonised many African countries and introduced an Indian labour force, these men brought their recipes to Africa, and they soon became popular with the locals. Because of this, chapatis are also a traditional food in Kenya and many other African countries.

Chapatis are cooked on a very hot tava pan, which are specifically designed for cooking Indian flatbreads. It is the right shape and size and retains heat to provide a hot surface to bake the bread in seconds. 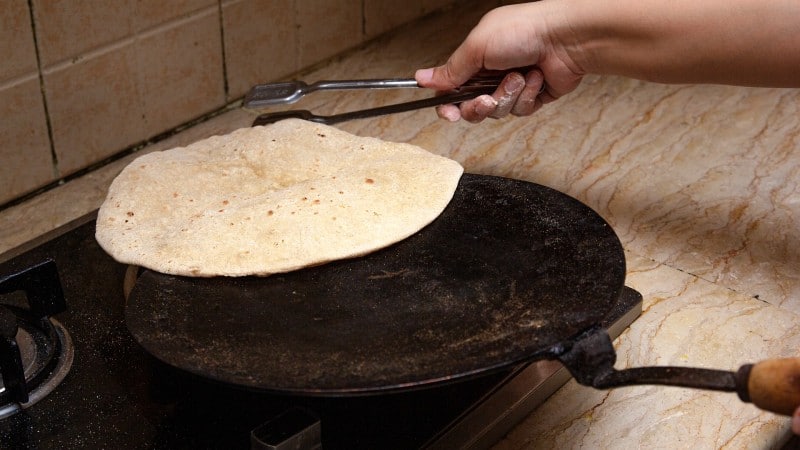 The pesara dosa is a thin pancake made from mung bean batter, which is left overnight to ferment. To make a tasty breakfast, spread a little oil or ghee on a griddle, spoon batter and spread to form a round shape.

You can add ginger, chillies, coriander, onion and cumin and press gently into the batter. After a minute, flip and cook for a further minute. Fold the pesara dosa and enjoy a healthy meal.

Although India is said not to have a national dish, the pesara dosa is so popular it has become known as India’s national dish. It has a toasty, buttery flavour and is likened to a crepe because of how thin this pancake is. 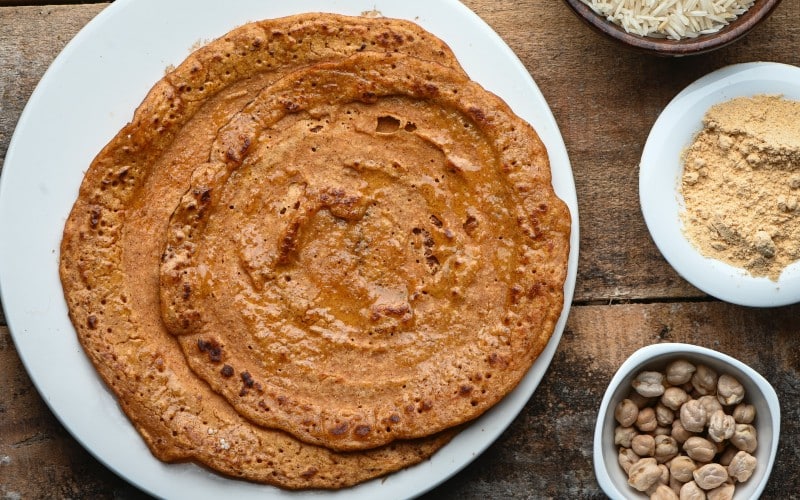 These are puffy, crispy, golden balls of deliciousness, prepared with water, flour and cumin seeds. Deep-fried and served with savoury and sweet dishes. Puri is considered a snack food, and although very tasty, it’s not something to enjoy on a daily basis!

Puris are commonly offered as a side to creamy curries as it adds texture to these soft dishes. To get the best crisp results, consider cooking your puri in a deep karahi pan with a lid to save on energy and retain the heat for even cooking. 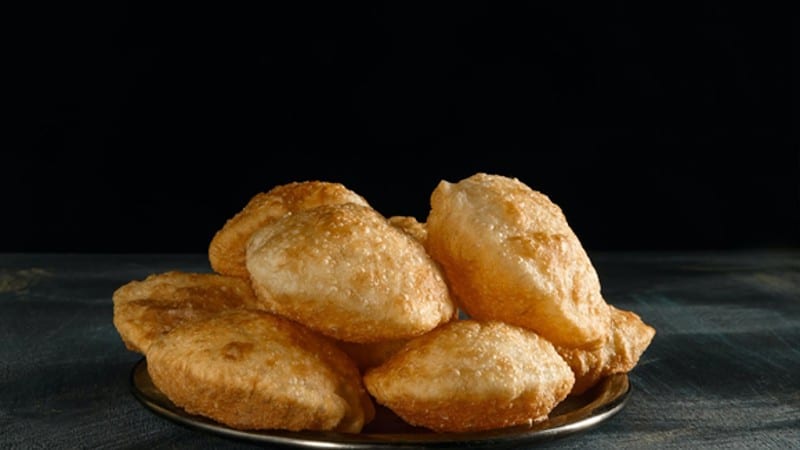 The paratha is a layered flatbread that is a north-Indian breakfast essential. They are easy to prepare with flour, salt, water and egg. Make a dough, leave it to rest for 30 minutes, then roll out and fold, adding ghee before rolling using a thin wooden rolling pin.

The dough balls should be refrigerated for half an hour before rolling and cooking on a dry pan. Add ghee to the top of the paratha when it is in the pan. Serve this hot, flaky Indian flatbread with pickles, chutneys or curries.

Parathas can be formed into different shapes circles, squares, triangles and stuffed with various ingredients. 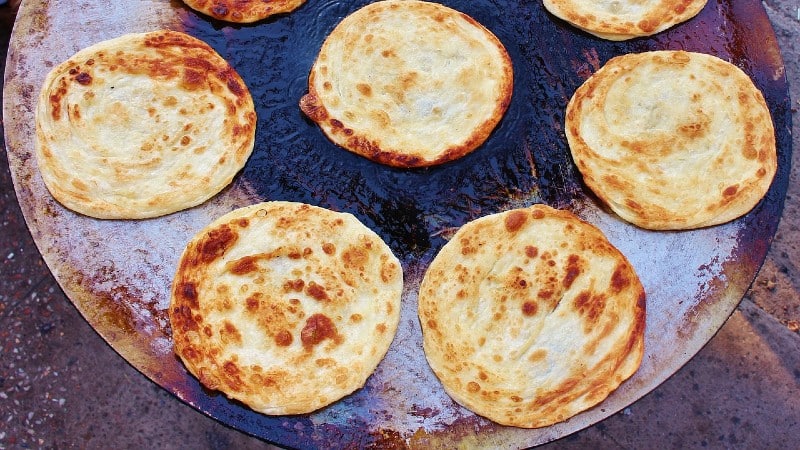 Appam is a south Indian recipe, enjoyed as a snack throughout the region. It’s a type of Indian bread that is cooked on the stovetop in an appam pan. The appam is made from fermented rice batter and can be served savoury or sweet.

Add an egg to the appam batter to make savoury flavoured appams. For a sweet version, add a small tin of sweetened coconut milk.

Extras such as tomato, onion, chilli, coriander can be added to the batter and spooned into the pan. After a minute, gently push them over to cook the other side.

Baati is a nutritious, unleavened bread from the Rajasthan region of India. It is popular and enjoyed by many in the desert areas of India. There is very little water in the bread which ensures that it has a long shelf life.

The dough is prepared with wheat flour, salt and ghee rolled into balls and baked in an oven for 30 minutes. When golden brown, remove and cover in ghee for a further 40 minutes. Baati is best served immediately with dal.

Bhatura is a fried Indian bread from north India and is enjoyed with chole, a spicy chickpea curry. Bhatura is made with a leavening agent such as baking powder, baking soda or eno.

Bhaturas are deep-fried, and it’s imperative that the oil is at the correct temperature to prevent too much being absorbed. It should be a lovely puffy bread when presented on the plate.

The thepla is an unleavened flatbread that is spicy and delicious on its own or accompanying curries. Thepla is flavoured with fresh fenugreek leaves and is popular throughout India.

Thepla can be kept at room temperature for 3 to 4 days or frozen for up to 3 months which is longer than other Indian flatbreads.

This tasty bread is baked on a hot pan and the ingredients used are a mix of herbs and spices as well as yoghurt. These make the perfect snack and can be taken to school or the workplace for lunch in a tiffin box.

Parotta are very similar to paratha, but although they closely resemble each other, subtle differences set them apart.

Parotta is served folded with extra ghee and is a little thicker than the paratha.